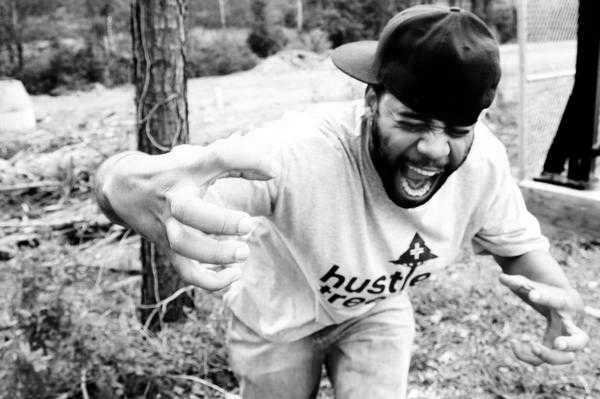 I recently had the distinct pleasure of interviewing Jamla Squad member, North Carolina repper, all around dope beat maker, Khrysis. We dove into topics such as the recent tracks and projects he’s dropped with the likes of Pete Rock, Phonte, Elzhi, Talib Kweli, and many more, how he feels about the fact that pretty much everyone calls themselves a producer now a days, and he even takes me to school, on, well, Macklemore. Check this shit out. Enjoy!

In case anyone reading this doesn’t know, which seems silly, but whatever, tell us who you are, where you’re from, and a little about what you do.

My name is name is Khrysis, I’m from North Carolina, representing Jamla Records and the Soul Council. I’m a producer, engineer, and, you know, a little bit of MCing on the side.

…again, for those who might not have started to fuck with you yet, tell us where we might have heard you or where we could find you if we were looking.

What do you feel is your biggest strength as a producer? …weakness?

As a producer I feel like, you know, chopping records is my strength – I love chopping records, and nobody is going to be able to hear what I hear in these records, and to me, that’s a strength. My weakness is probably – it’s like anybody else’s weakness really, sometimes, you know, you get caught up in your own little world, or you might get a little ahead of yourself, you might get in the way of yourself sometimes. It’s nothing that can’t be worked on. Nothing that can’t be fixed. Nobody’s perfect – you know what I’m saying? But, you know, that’s just me.

Who are the producers that inspire you the most – both classics and newer cats?

Well of course the classics are your DJ Premier’s, your Pete Rock’s, Large Professor, Erick Sermon, The RZA. I’m a big J Dilla head – I guess for me that would be in between the classic and current because, to me, I feel like he passed before he could really get into gear the way he should have. However, he does have enough time between now and the records that’s he’s done to be considered classics, so. Currently – Alchemist, Nottz, my peers, the Soul Council, they inspire the shit out of me. Let’s see – there’s a few others, DJ Khalil, Focus…, Jake (One), Marco (Polo), !llmind, Kev Brown, Oddisee – there’s more. There’s more – if there’s anyone I forgot, blame the mind, not the heart.

So, you relatively recently dropped a lot of new shit. …a lot of new, hot shit. Tell me about it, and tell me what’s next.

The last three projects that you probably heard out of Jamla are She Got Game by Rapsody, hosted by DJ Drama, Add-2 and Khrysis – Between Heaven and Hell, and most recently Jamla Is The Squad, which is the label compilation. We just put out the record with Phonte, Elzhi, and Talib Kweli. We just also just dropped a record with my label mate GQ and Heather Victoria, and a record with Pete Rock, Lecrae and Rapsody. Those records are out right now and they are available on the Jamla Is The Squad compilation. (Which can be purchased HERE)

It might be something that ain’t even out yet. We’ll start with what’s out – we got my baby, Between Heaven and Hell, that’s my baby right there. Another one of my babies – I actually have the Pro Tools session up for it right now, I was actually going through it just now, is a compilation project I’ve been working on for the past three or four years. It’s called The Hour of Khrysis, that’s on the way. …and then I’m also working on a project with Oh No, called OKMD.

Who’s an MC that you’d literally disown a family member to work with?

I don’t know – I love my family too much.

C’mon. …give me somebody.

I don’t have any family members I’d disown.

Fine. Who is someone you REALLY want to work with?

How do you measure your success?

You know what, I got a lot of – what makes me happy. I measure it by what makes me happy, you know what I’m saying? It’s not monetary. For me, it’s not monetary at all, or a popularity thing, or a status thing. It’s like, something that I wanted to accomplish. When I accomplish what I wanted to accomplish, that’s when I feel successful. When I’m happy about it and I’m proud about the work that I’ve done, you know? Then I call that successful. That’s what I call successful.

As of right now, more work with Jamla, cause you know, that’s priority over everything to be honest with you. More beats, and more raps out of me. It’ll definitely be, you know – I should be wrapping up with compilation pretty soon, so. So that’s the big thing that I’m working on right now, wrapping up this compilation that I got here.

Who’re you listening to right now?

It’s random as hell, but these are the things that get me going. They jog my creative juices!

What’s it like being a producer at a time when so many people consider themselves a producer?

Wow. It’s a double edged sword because everybody’s got to start somewhere, you know? Everybody’s got to start somewhere. There was a point and time where somebody would have considered me somebody who’s just on the internet claiming to be producer. It’s probably someone who still does, you know? But, I know what I’ve done, and I know what separates me from the rest. I know, you know – you can tell how to separate who from who, you know? Being the fact that everything is so accessible now, you know, it kind of really doesn’t – at the end of the day it really doesn’t matter as long as you have your lane, and your fan base available to you. As long as you have fans, and clientele to reach out to, then you have a market.  So, you know – but the most important thing I guess, pertaining to the question, is that everyone starts somewhere. It’s (the internet) is a perfect breeding ground to get your music out there to the world. …and they’ll let you know. They’ll let you know if it’s wack, if it’s not, they’ll let you know.

What is your biggest pet peeve as a producer? …what makes you cringe? What do you not respect?

I wouldn’t say not respect, but sometimes what makes me cringe is bad mixing. But that’s some nerdy shit for me, you know what I’m saying? Or, you know, just bad mixing really. I’m able to catch little mixing errors, but that’s just me and my nerdiness. Sometimes I can bypass it, sometimes I can’t. …and sometimes I have to look at it like, this song isn’t for me, but I would – this song has a market and is something that could sell, so therefore I can respect it, you know? Some songs you enjoy, some songs you respect.

What’s something you’ve always wanted to be asked in an interview?

Ha! You know, I’ve never thought of that.

I’m supposed to put you on the spot. …you’re in an interview. As you see it, what’s your place in hip hop?

My place in hip hop? Somebody who really – I’m definitely somebody who stands for what they believe in, and I believe in not fixing something that’s not broken. If it ain’t broke, don’t fix it – I’m one of those guys, you know? I’m trying to give people what they’ve been missing, you know what I’m saying? Especially for people who might not have access to the internet and things of that nature, you know? I’m trying to be that real hip hop dude that’s on the internet and off the internet at the same time. That, you know, music nerds can respect it – you know, music nerds can enjoy it and respect it, and, I guess, your casual listener can enjoy as well, you know?

Do you compare yourself to any other producer/s? …why or why not?

Nah, because I feel like I am my own producer at the end of the day, you know?

How’re you making a name for yourself?

…just making sure I have consistent work. Making sure that my brand is consistently out there as much as possible in the world and in the ears of the consumers.

What do you love about hip hop, and what do you hate about it?

Give me an example.

Records that are – when you have pop records that get called hip hop records, you know? I won’t name no names, but I’m pretty sure…

I’m not saying any names! Again. …here’s the thing about Macklemore, Macklemore knows where he comes from. He’s – we’re talking about a guy here, who, soccer moms love his shit, right? You know what I’m saying? You’ll have a crowd of people who don’t know shit about hip hop, but love him, and what does he turn around and do? Fucking, he turns around and has Big Krit and Talib Kweli open up for his show. So he introduced Kweli and Krit to an audience that probably wouldn’t think twice about looking at them in the first place.

So how can you consider that to not be hip hop?

Fine. …tell me a secret.

Tell you a secret?

For real yo – dogs do what I say when I tell them to do it.

I’m so done with you right now.

What do you want the world to know about Khrysis?

That, you know, the music was dope, and he was consistent, and you know.

One Time For Your Mind